Spoke with my son’s counselor the other night.  She indicated that he still feels like I have never apologized to him.  I actually have — numerous times — both in person and via email.  But the fact remains that he doesn’t feel like I have.  It is very very hard to apologize to someone who rarely talks to you — and even when he does, it’s not civil, there’s no respect and he is more than willing to accuse, blame and insult me at every opportunity.  It’s not his fault, it’s how his mom has trained him to act toward his father, ever since he was little.  His mom’s favorite show was “Home Improvement” and “Everybody Loves Raymond,” I think mostly because they painted the father as a complete idiot and the wife as the most rational person in the room.  The three of them used to watch those shows constantly, laughing hysterically at the stupidity of Ray Romano and Tim Allen.  I think it’s the main reason I love watching shows like “Last Man Standing” now.  Sure Tim Allen is goofy at times in it and he can be ridiculous, but he’s also wise, respected, valued and important to his family.  I think Tim noticed the problem with Home Improvement and worked really hard to improve it and do the show he wanted to the second time around.  I love that. 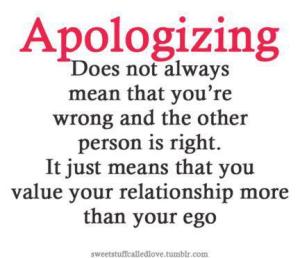 After hearing that my son was still needing an apology, I wrote him this letter via email.  I have a program called “sidekick” that allows me to track if he has opened my emails or not and he has read it at least three different times.  I think that bodes well for him feeling like it moved him a bit.  Either that or he’s showing his mom and his “new father” as he calls her boyfriend…  But I’m going to think positive about it.  Here’s the letter — maybe it can help some of you craft something similar for your kids?

You probably should read this after school and in a quiet place by yourself.

Just thought I’d write you a bit about how I’m feeling of late.  I just want to say I’m continually in a state of sorrow because we don’t have the relationship we once had.  I always imagined that the older you got, the closer we’d get and the more you’d come to me for advice and input into your life – whether that was about a job or problems at school or with women, or just feelings you had that you didn’t know what to do with.  I don’t think there’s anyone that knows you as a whole man and gets you like your dad does.  I know I feel that with my dad quite frequently.  He always amazes me with his wisdom about who I am and what I really need — not necessarily what I think I need, but what I really need.
I dreamed of being that type of dad for you very early on in your life and worked hard to be there for you through all your sports and school and conflicts and anything you dealt with as you were growing up.
I am so sorry that I was unable to continue developing that type of  relationship with you after your mom and I separated.  I know I didn’t handle things the way I should have much of the time during that process.  I never ever expected I would get divorced and really had no plan or idea of how to manage that so I did fumble a lot of the early steps in the process and I think that wounded you deeply.
I have tried to reach out to you regularly to let you know that I’m here, I’m not going anywhere and I will always want to be in your life at some level.  I realize that you have a surrogate dad situation with your mom’s boyfriend and I think that’s great and you need strong male role models in your life, but I also know that no matter how many of those you have, everyone still wants their dad to love them and accept them and be proud of them.   I want to be that for you, Joshua.
I hope that through your counseling sessions and your discussions with role models in your life that you will come to a place where you can realize that your Dad is a flawed human being.  He makes mistakes. Just like you do.  Just like every human does.  That doesn’t mean he has to be out of your life.  It just means he needs forgiveness and grace like you do.
I pray for you constantly.  As do your grandparents and Uncles and Aunts and many of my friends.
I look forward to the day when we can have some kind of relationship again.  I hope there is room in your heart to forgive me for the things that I have done to wrong you at some point.  I miss you.  I love you.
Dad

One thought on “Is an apology in order?”

this blog is written by "Jim". He is a divorcing father of several teenagers. In his research on divorce and discussions with those in church and in friendships he had, he discovered that there was very little help for Fathers going through divorce -- especially those who didn't have the kids. Our culture glorifies the travails of the single parent and they are many. However, there is huge difficulty in being the parent "on the outs." This is a journey through the hills and valleys of that road.
Amy Clay

Confessions of a Fairly Merry Widow

As The Past Falls Out Of My Pocket, The Journey Forward Is All I Have

Life is a gift of adventure, launch each day with Purpose, navigate with Principles, and explore with Passion!

Notes from an Alienated Dad

The Fine Line Between Fatherhood & Sanity

Strategies and Straight Talk for Single Parents and Stepfamilies to make their lives easier and their relationships better.

A Generation For A Cure